Today I don’t have a solution for a problem for you. I don’t even think I can entertain a lot of people. I just have a heartbroken little girl and a question to everyone out there. Has anything like that happened to you? 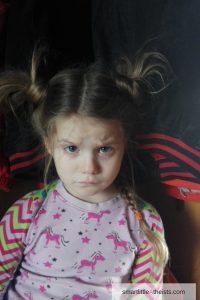 She got in trouble for telling the truth. This is her face when she got home. And this is what happened.

A girl came up to her and asked her to “tell the truth about Santa Claus”. Now, my little fighting princess is a scientist at heart. When she was five, she told me that she knew mom and dad were Santa, but she wouldn’t tell her older brother because he still believed. That said, she was wayyy more considerate than I could have been…

“If I tell you, you might not like what I say,” she says. “Sometimes people get sad when I do.”

“Tell me anyway,” her classmate insists. “Grownups don’t tell me the truth!”

So my daughter tells her that Santa Claus doesn’t exist and that the parents bring the presents and fill the boots (german/austrian tradition on december 6th). Her classmate runs to the teacher to tell on Fighting Princess – and she gets chewed out by the teacher for the incident.

Welcome to being an atheist, sweety. You did everything right and still got in trouble for it. Apparently being an A-SantaClaus-ist is good practice fo later.

She later told me that this wasn’t the first time. In her own words: “Mom, I had to she was THREATNING me! She said I had to listen to her or the toothfairy wouldn’t come. So I told her that the toothfairy doesn’t exist!”

So, what do you do, what do you SAY to a kid in that situation? Has anything like that happened to your kids at school? Let me know! *pokes comment section*